The Tübingen-based group has filed a lawsuit in a German court seeking “fair compensation” for alleged infringements of its intellectual property rights in the development of the Covid jab manufactured by BioNTech and US drugmaker Pfizer.

But CureVac said it was not planning any moves that would affect the production, sale or distribution of the vaccine. The success of its Covid jab transformed BioNTech from a little-known company into a multibillion-euro biotech.

CureVac is developing its own mRNA vaccines, including a Covid jab. But the group abandoned its first attempt at one after it appeared less effective in a late-stage trial than those made by Pfizer and Moderna, although the data were not directly comparable.

Announcing its legal action, CureVac said in a statement that it considered the rapid development of the vaccines a “tremendous achievement” with an “unprecedented positive impact for global public health”.

But “this achievement is based on decades of scientific research and innovation, supported by CureVac as the earliest pioneer in mRNA technology”, it added.

Franz-Werner Haas, CureVac’s chief executive, said he believed BioNTech was “standing a bit on our shoulders”, claiming that the Covid-19 vaccine was partly based on innovations that CureVac had worked on over the last 20 years. “If you have success, don’t forget where you get it from,” he said.

BioNTech said it values and respects “valid intellectual property rights” but its work is “original” and it will “vigorously” defend it against all allegations of patent infringement. “We are aware that it is not unusual that other companies in the pharmaceutical industry, having witnessed the success of Comirnaty [the name of the vaccine], are now suggesting that the vaccine potentially infringes their intellectual property rights,” it said. 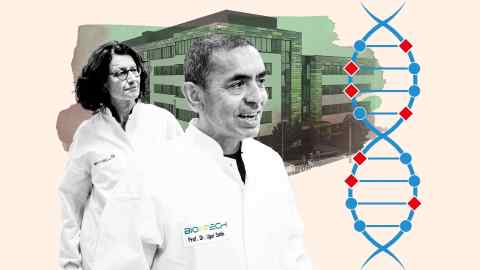 The lawsuit could be an opening shot in an intellectual property battle over mRNA patents as groups seek a slice of the profits made by market leaders BioNTech, Pfizer and Moderna.

Before the pandemic, there were no approved vaccines based on mRNA technology, which teaches the immune system to recognise a virus based on part of its genetic code. CureVac’s first Covid shot used an unmodified version of mRNA, whereas the vaccines from BioNTech/Pfizer and Moderna modified the mRNA.

Haas said he had the “highest respect” for BioNTech, but that now was the time to talk about CureVac’s contribution. “There’s no way we would have done [the lawsuit] earlier, in the middle of the development of this product, because the vaccine was needed for the world to turn into whatever is normal now,” he said.

BioNTech generated almost €19bn last year, almost all from the Covid vaccine. While sales of the jab are expected to decline this year, the company is developing new versions of the vaccine targeted at the emerging variants for autumn booster campaigns.