Moderna on Friday said it will sue Pfizer and BioNTech for copying the “groundbreaking technology” behind its Covid-19 vaccine, setting up a legal clash between pharmaceutical rivals behind some of the best-selling jabs used to combat the coronavirus pandemic.

The US biotech said it would seek damages from its rivals for allegedly infringing several patents protecting Moderna’s messenger RNA technology platform that were critical to developing its Covid jab, including one related to chemical modifications that enable mRNA to enter the human body without provoking undesirable immune responses.

But it said it expected rivals such as Pfizer and BioNTech to respect its intellectual property and would look to enforce these legal rights through lawsuits in US and German courts.

“We are filing these lawsuits to protect the innovative mRNA technology platform that we pioneered, invested billions of dollars in creating, and patented during the decade preceding the Covid-19 pandemic,” said Stéphane Bancel, Moderna’s chief executive.

He said Moderna is continuing to use its mRNA platform to develop medicines to prevent HIV, influenza and other disease but would consider licensing its technology to rivals on commercially reasonable terms.

Pfizer said it remained confident in its intellectual property supporting the Comirnaty jab. “Pfizer/BioNTech has not yet fully reviewed the complaint, but we are surprised by the litigation given the Pfizer/BioNTech Covid-19 vaccine was based on BioNTech’s proprietary mRNA technology and developed by both BioNTech and Pfizer,” the company said in a statement.

Moderna’s decision to sue its biggest rivals marks a serious escalation of the intellectual property battle over the ownership rights to mRNA, a technology that teaches the immune system to recognize a virus based on part of its genetic code.

Smaller companies have already filed a series of patent infringement claims against Pfizer, BioNTech and Moderna related to their use of mRNA.

Experts say the stakes are high, with Pfizer, BioNTech and Moderna forecast to generate $52bn in vaccine sales in 2022, according to Airfinity, a health data analytics firm. A host of companies are seeking to develop new medicines based on the same mRNA technology.

For the text of the COMPLAINT: see IPEG Insights: 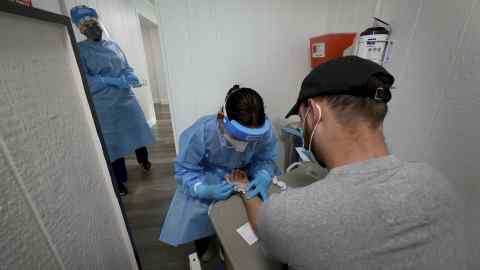 Kevin Noonan, a lawyer specialising in patent litigation at MBHB, said it was no surprise lawsuits linked to the ownership of mRNA technology are “coming out of the woodwork” at this stage of the pandemic.

“I think a lot of people were very leery about suing during the pandemic and not making it look like they were doing anything to thwart, retard or prevent companies from making vaccines. So that created a two-and-a-half year hiatus.”

As the immediate crisis passes companies are now racing to protect the investments they had made in mRNA technology prior to the pandemic by filing patent lawsuits, Noonan said.

Moderna said it would only seek damages from Pfizer and BioNTech for sales registered after March 8, which it said is consistent with an earlier pledge not to enforce its patents while the pandemic continued. Nor would it seek damages for vaccine sales to 92 low-income countries or for any sales where the US government would ultimately be liable.