The battle for supremacy in the vegan food market has taken a new turn with a legal row over a protein molecule designed to make plant products taste like beef burgers.

Food executives are closely watching the patent dispute between two US companies: Impossible Foods, one of the earliest plant-based meat producers, and Motif FoodWorks.

Impossible claims Motif has infringed its patent protecting the invention of a beef replica product that uses heme, a molecule containing iron.

Impossible filed a lawsuit in a Delaware court in March but Motif last week challenged this patent, filing a petition with the US patent appeal board, and requested the lawsuit be delayed while the patent is under review.

The legal dispute is the latest in an intensifying battle between plant-based food producers, many of which have turned to biotechnology to create vegetarian burgers and fake meat products that aim to mimic the taste of real meat.

The importance of research and development for food tech start-ups and the prevalence of former Silicon Valley executives in those companies is expected to lead to an increased number of patent lawsuits in the sector. US start-ups The Better Meat Co and Meati have also turned to the courts to try to resolve a dispute about fermentation technology.

“New technology allows you to differentiate and create competitive advantage,” said Isabel Fernández, lead R&D scientist at Heura Foods, a Spanish plant-based meat group. Technology was essential in solving the issues around the texture and taste of plant-based foods, which meant that “we are going towards more patent dispute situations”, she added.

Patents are also important in fundraising for food start-ups, providing a basis for their valuations. A ruling against a company could harm its ability to raise further capital as well as opening the door to competitors using similar technology.

Impossible was founded in 2011 and launched its burger in 2016. After its $500mn funding round last year, it was valued at $7bn by corporate data group PitchBook. Its rival Beyond Meat floated to great fanfare in 2019 but its market capitalisation has sunk to $2.5bn from a peak of more than $14bn. One of Impossible’s main selling points is its use of soya leghemoglobin, a protein that carries heme.

Impossible produces soya-based heme using genetically modified yeast. This, says the company, is the secret ingredient that makes consumers crave its vegetarian burgers and sausages and differentiates them from competitors.

Motif was launched by Boston-based biotechnology group Ginkgo Bioworks in 2019, and uses synthetic biology to create products for the plant-based food sector. Valued at $726mn by PitchBook, it has created its own heme product called Hemami to enhance the flavour and aroma of plant-based meat. 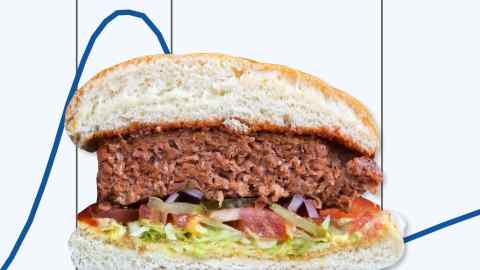 In its lawsuit, Impossible said Motif had infringed its patent by “making, using, selling, and/or offering for sale an imitation burger” which includes Hemami, directly or through intermediaries.

Motif said it was confident that the patent appeal board would repeal Impossible’s patent. “Impossible’s claims are a legally and factually baseless attempt to stifle innovation and limit consumer choice to preserve its own profits,” it said.

Impossible said that the patent office had already examined and granted the patent and called for the court case to proceed, adding: “Motif’s futile effort to delay the case is a deliberate and obvious attempt to buy time while they continue to infringe our patent.”

Patent infringement cases are not the only battleground for plant-based food start-ups. Trademarks have also been a source of contention, with Sweden’s Oatly last year losing a case it brought against PureOaty, an oat milk brand owned by a UK family farm.

In 2020, Nestlé changed its European plant-based burger from “Incredible Burger” to “Sensational Burger” after a Dutch court ruled the Swiss group had infringed Impossible’s trademarks and that consumers were likely to be confused between the Impossible and Incredible burger.

This story has been amended to correct Impossible’s claims in its lawsuit.